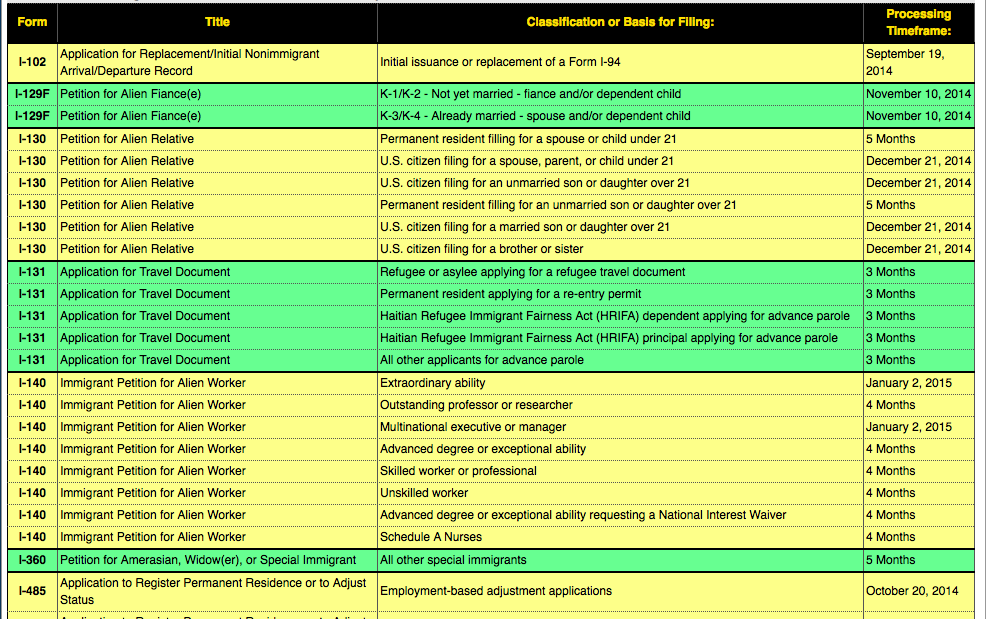 One would think that the timelines that USCIS lists on their website for each case type a particular USCIS office would be accurate, up to date, and easy to understand.  Unfortunately, this is not the case.  If you go to the USCIS website and click on See Office Case Prcessing Times you will be presented with several choices.  You need to know at which office your case is at, and then you can click on that office and up will pop a table with applications types and processing dates.  ( I am copying the table for the Texas Service Center below for example purposes).

As you can see, this table was updated on July 27 2015.  Right now you must be thinking “He said that they do not keep things updated, but that’s less than 1 week old”.  While that is true, bear with me and I will explain.  Looking at the chart and picking one petition type, I-140 NIW,  we can see that the Texas Service Center is saying that it is only taking 4 months for them to adjudicate these applications.  So it would follow, if these dates were actual accurate, that the Texas Service Center would be processing cases that were filed as of March 27, 2015 – 4 months prior to July 27, 2015.  Unfortunately, this is where the accuracy and the timeliness of the information comes back to affect these dates, because that is not the date that the Texas Service Center is currently at.

First,  as USCIS states, the date they give only means that they are processing cases within 30 days of that date.  In other words, while the may be working on some cases that were filed as of March 27, 2015, the majority of cases they are working on have been filed BEFORE that date, and may have been filed as early as February 27, 2015.

Additionally, if you look closely at the table, right at the top of the table, there is language that states “Field Office Processing Dates For Texas Service Center As Of:  May 31, 2015”.  What this means is that although the table was updated on the website on July 27 ,2015, the actual dates they are talking about are only accurate  AS OF MAY 31, 2015.

Looking at the cases our office has filed, and what is still pending, it is clear that, AS OF TODAY, August 3 2015, the Texas Service Center is still in December 2014.   This adds another several months onto the processing time, and shows how inaccurate USCIS dates really are.  They are saying that they were in January/December as of May 31, 2015, but as of today, over two months later, they are STILL at the same dates.  Either they are moving exceptionally slow, or they are giving out overly optimistic dates.  While they have certainly been slowing down, unfortunately it also appears that they are giving out dates that are very much overly optimistic.

The conclusion here is that, unfortunately, USCIS is not giving out very accurate information when it comes to the timelines for adjudicating application.  It is very hard to predict, therefore, exactly when we will hear back on any given petition. Especially when you consider that, despite their insurance that they operate on a first in, first out basis, they very frequently will adjudicate application out of order. We know this can be very frustrating to our clients, and it is also very frustrating to us, but it is something we have to deal with on a daily basis.  There is very little that can be done about it.  While we certainly try our hardest to get USCIS to move on such cases, there is not always a quick fix.

Please contact us with any questions.  Also, please remember, as always, this blog does not offer legal advice. If you need legal advice, consult with a lawyer instead of a blog. Thank you.

One thought on “USCIS Timeline Reports: How to Read Them”